With the majority of Kauai’s natural marvels inaccessible by ground, the best views are from the sky! Fly over the Western Section of Kauai on this expedited Kauai flight. Soar through Waimea Canyon, known as “The Grand Canyon of the Pacific,” stretching fourteen miles long and one mile wide. Fly over the lush and rugged terrain of the Na Pali-Kona Forest Reserve including Awini Falls and Waialae Falls. Get intimate views of Manawaiopuna Falls, commonly referred to as Jurassic Falls, made famous for its scenes in the film, Jurassic Park. Conclude your flight over Hanapepe Valley, popular for its rich farmland and grand mountain ranges.

Soar over Kauai, the “Garden Isle,” on this extensive island aerial adventure. This helicopter tour of Kauai features two of its more recognised natural landmarks: the Na Pali Coast and Waimea Canyon. Grasp the magnitude of the Na Pali Coast from the air, Kauai’s 17-mile coastline known for its emerald-hued cliffs with razor-sharp ridges above the Pacific Ocean. Dubbed “The Grand Canyon of the Pacific” by Mark Twain, Waimea Canyon is known for its desert landscape and vibrant colors. View the spectacular shoreline as you fly toward the Bali Hai Cliffs along the North Shore and Mount Makana. Travel past the tropical rainforest, Mount Waialeale, one of the wettest places on Earth. Get a bird’s-eye-view of Jurassic Falls, one of Kauai’s most renowned waterfalls, and conclude your flight over the Hanapepe Valley, famous for its scenes in the film, Jurassic Park. 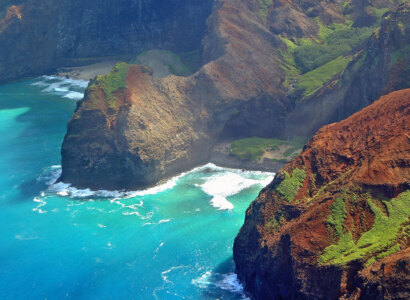 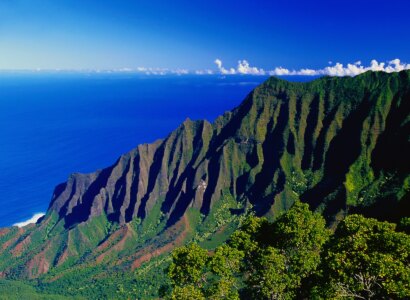