EagleRider’s World famous Route 66 motorcycle tour travels the original Route 66, known as the “Mainstreet of America” or “Mother Road” . At over 2400 miles long from Chicago to Los Angeles, Route 66 crosses three time zones and 8 States: Illinois, Missouri, Kansas, Oklahoma, Texas, New Mexico, Arizona and California. Route 66 has been the path of migrants, dreamers, desperadoes and an entire generation of vacationers discovering the way west. The 1950’s were the Route 66 glory days, when thousands of cars rode bumper to bumper behind each other to experience the Western frontier. Hotels, motels, gas stations, classic restaurants, and the “New” America sprang up everywhere. Much of Route 66’s classic roads, restaurants, gas stations, and nostalgic landmarks are preserved just as they were in the 1950’s. The famous and nostalgic Route 66 is the road created in heaven for motorcycle touring. Simply stated, this is the guided tour of America! 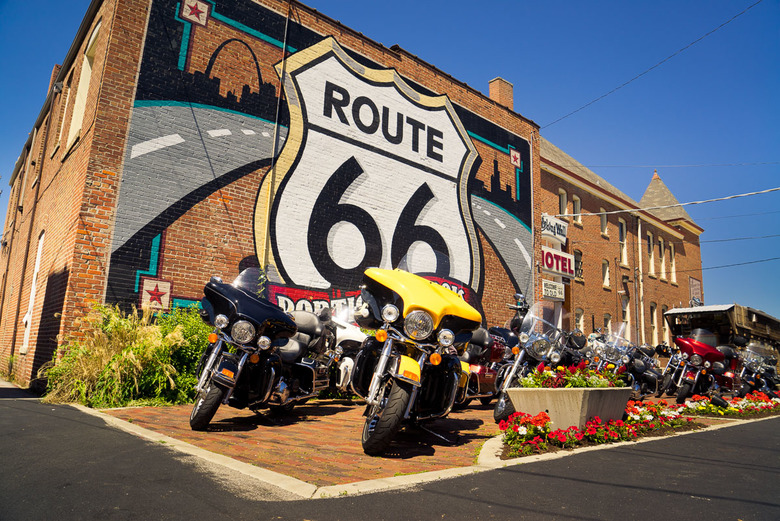 2021 DEPARTURE DATES
Please note that day one is independent and you meet your guide and group on day two.

2022 DEPARTURE DATES
Please note that day one is independent and you meet your guide and group on day two.

From £4939 per person based on two adults, sharing one motorbike and one hotel room. Other prices available on request.

A selection of insurance types exist, call for full details.

Depart the UK on your chosen scheduled flight to Chicago, Illinois. Upon arrival, independently make your way to your hotel, where you spend the first night of your adventure.

Nicknamed the ‘Paris of the Prairie’, Chicago is the biggest and most exciting of the Great Lake cities. It includes a stunning skyline along Lake Michigan, and a gamut of top-rated museums, restaurants and cafes, and innumerable bars and nightclubs that pay homage to the city’s strong jazz and blues heritage. Tonight you will get to meet your fellow riders and Tour Guides at an Orientation Meeting at the tour hotel, followed by a great Welcome Dinner to kick-off your dream Route 66 journey!

This morning you pick up your bike and are off to the ultimate American road trip. The legendary Route 66 begins at the doorstep of a EagleRider location, cutting through the state of Illinois before running all the way to the Pacific Coast. From Chicago you head south along the Pontiac Trail, the original name for this bit of the road here, passing through Joliet, checking out the Launching Pad Giant, stopping at the amazing RT 66 Museum in Pontiac and generally getting a feel for the rubber on the Mother Road.

Today you’ll head towards St. Louis! You will stay primarily on the 2-lane sections of the Mother Road, traversing cornfields and small towns that represent the heartland of America. Your arrival into St. Louis will be over the Chain of Rocks Bridge, the original bridge where RT 66 crossed the Mississippi River. Enjoy the short ride today into the “Gateway to the West,” St. Louis. This amazing city rests along the shores of the mighty Mississippi River and is home to some of the best live music and BBQ ribs in the country.

Try to get up early to walk across the street today and enjoy an early morning view of the St. Louis Arch and Mississippi River before you hit the road. You’ll quickly leave the city in mirrors as we settle in to enjoy the rolling Missouri hills that make this area so beautiful and fun to ride in. You will stop and see the famous World’s Largest Rocking Chair in Fanning, wind your way on the twisting roads of Devil’s Elbow, and stop at other Route 66 icons. Tonight you will enjoy a stay in Joplin, a city that was hit very hard in 2011 by a massive tornado. Maybe tonight you’ll hang with the locals and hear some amazing stories about what it was like to be in the eye of a massive tornado!

Today is all about the route! From Joplin you will head west through the hills and horse country through Oklahoma, crossing Miami, Claremore and Catoosa, home of the legendary Blue Whale before passing through Tulsa, You will also go through the reservations of several Native American tribes. In the 1830s, much of this land was considered “unusable” by the Federal Government, so various Indian tribes were “settled” there after colonisation, including the Choctaw, Chickasaw, Seminole, Creek and Cherokee. This evening you will stay in Oklahoma City, the heart and soul of Route 66.! At night you can enjoy at Bricktown, the neighbourhood in the heart of the city full of lively restaurants, bars and shops.

This morning you’ll travel along some of the oldest stretches of Oklahoma’s Route 66. Once the land of vast buffalo herds, this section of 66 traverses some of the great cattle trails which were used in the 1860s to drive herds of cattle from Texas up to the railhead in Abilene, Kansas. You will ride along a section of the Chisholm Trial, which passes through Yukon and El Reno, and stop at the amazing Route 66 Museum in Clinton. After lunch you will cross the border into the Texas Panhandle, the southernmost portion of the Great Plains. At the Big Texan Steakhouse in Amarillo you have the opportunity to enjoy the best steaks in Texas, guaranteed!

Today you leave Texas and are on your way into “The Land of Enchantment”, New Mexico. After passing through the world famous Cadillac Ranch, you’ll stop at the midway point of RT 66 in Adrian, Texas! And how about the ghost town of Glen Rio, where you can stand with one foot in New Mexico and the other one in Texas? From there you enter the land of the Comanche Indians, where mesas, mountains, cactus and pines define the landscape as you head up into the High Plains and altitude of Santa Fe in central New Mexico. Santa Fe is one of America’s oldest and most beautiful cities, and will be your base for the next two nights.

This morning you head south, down to Albuquerque, New Mexico’s largest city, with a third of the state’s population. Albuquerque is sprawling at the heart of New Mexico, where the main east – west road and rail routes cross both the Rio Grande and the old road south to Mexico. You cross the Rio Grande and head west – out into the open country and the hues of the Navajo wilderness. You are skirting mesas and bluffs on into Laguna. Further on ride through Grants and along Cibola National Forest towards the famous Route 66 town of Gallup – an old railroad town and Indian stronghold. Enjoy your stay tonight with a host of fellow riders from around the world at one of the many biker friendly hotels in Gallup.

Today is another huge day, full of spectacular scenery and iconic Route 66 stops. You’ll cross the border into Arizona and ride to Petrified Forest National Park, a fossilised prehistoric forest of gigantic trees that has been unearthed by erosion. Here you will have the time to explore this stunning landscape and take a moment to get lost in the expansiveness that defines this area. Leaving Petrified Forest NP, you travel further west to the Wigwam Hotel in Holbrook, and stop to stand on the corner in Winslow! While most groups stop in Flagstaff or Williams, Arizona, you will ride on to spend your night just one mile from the South Rim of the Grand Canyon! Tonight you will sit with a cold drink in your hand and enjoy the sunset over the South Rim of the Grand Canyon.

For those looking to get a real “Bird’s Eye View” of the Grand Canyon be sure to let us know and we will arrange a morning helicopter ride over the heart of the South Rim. Leaving the Grand Canyon, you will pick Route 66 back up in Williams, Arizona before heading to stops in the famous 66 towns of Seligman, Hackberry and Kingman, and Oatman before arriving at your Laughlin hotel on the shores of the Colorado River.

Today is a quick ride for a little detour to take in the incredible sights and sounds of Las Vegas! Your journey this morning will take you through your first real taste of the Mojave Desert, and a ride across the famous Hoover Dam! One thing is for sure, your time in Vegas may be short, but it will sure be sweet! Try to get a little bit of sleep because you pick up Route 66 tomorrow right where you left off yesterday.

Today you cross the border into your final State on Route 66 – California! One thing is for sure – today is a day like no other as you traverse the Mojave Desert which offers some of the most dramatic scenery in Southern California. You can imagine what it must have been like for early Route 66 travellers making their way across this huge expanse of desert, dotted with Joshua Trees, cactus, volcanic rock and sand as you stop in the tiny “waystations” of Amboy and Ludlow. Tonight, you celebrate your last night on the Mother Road.

Today you head off for your final destination – the end of the road on the Santa Monica Pier! To get there, however, you first get to ride the 66 miles of the Angeles Crest Highway through the mountainous terrain of Angeles National Forest. This highway is considered one of the top motorcycle rides in southern California and rises to over 2300 meters. Next, you’ll descend the Crest into the Los Angeles Basin and head towards the Pacific Ocean. Riders always have mixed emotions as they stand at the “End of the Trail” sign on the Santa Monica Pier. There is a sense of joy and elation at having completed a journey most people only dream about, and a sense of sadness at the thought of the ride having come to an end. Tonight, you celebrate the miles you’ve ridden and the friends you have made as you party together at your Farewell Dinner!

Today your exciting trip will conclude in Los Angeles. You may choose to extend your stay or discover more of California. Otherwise, you make your own way to Los Angeles International Airport and check in for your flight back to the UK.

We offer two other escorted motorbike tours. In addition, any of these tours can be self guided or you can simply choose motorcycle rental and wander wild and free!